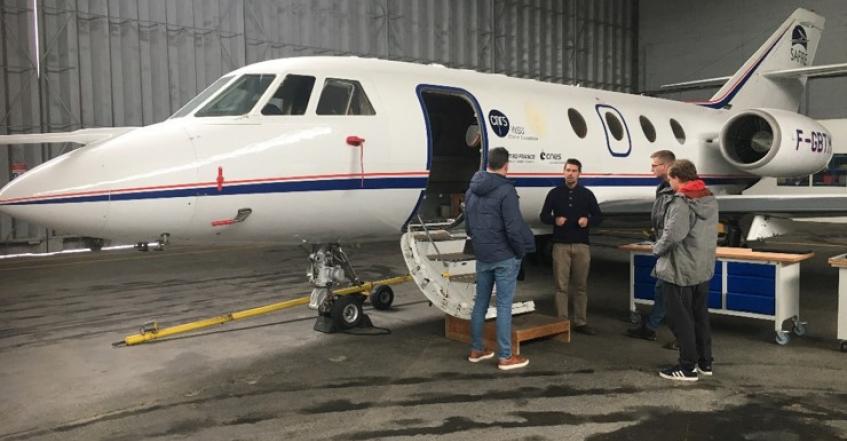 The second week of February, saw our team of engineers from SRON jump into a kitted out van with a precious load on board to travel from Utrecht (The Netherlands) to Toulouse – it was reminiscent of a scene from Scooby-Doo. What were they up to? One part of our SCARBO team was bringing the multi-angle spectropolarimeter SPEX airborne to Safire for an integration check with the Falcon-20 aircraft. The purpose of the integration check was to test the mechanical and electrical interfaces of the instrument with the Falcon.

Rob Wolfs, SRON electrical engineer, explained during the integration that this was the first time an instrument like this had been mounted into the Falcon aircraft and the team was anticipating anything. “Even though we came prepared, we are still nervous,” Rob said. "Prior to the integration-check we communicated frequently with the engineers from Safire, so we are pretty sure that everything will work, but then again there are always surprises. Luckily, the tests so far have worked like a clock!”

SRON Mechanical engineer, Geert Keizer, said this won’t be the first time SPEX airborne has flown and several changes needed to be made to move the SPEX airborne from one aircraft to another. “In 2017, the instrument flew on NASA’s high altitude research aircraft ER-2,” Geert said. “And it wasn’t as simple as pick-up, move, plug and play. We had to change the mounting approach completely. The biggest engineering change involved had to do with the flying altitudes of the different aircraft. The Falcon-20 flies at lower altitudes than the ER-2, and, at lower altitude windspeeds are higher. When the aircraft experiences sidewinds, it will fly ‘yawed’, which means that it is twisted slightly, with the direction of the nose not aligned to the direction of flight. Our instrument doesn’t like that.

“In addition, SPEX airborne cannot ‘look’ through a window because windows change the state of the polarisation of incoming light. So the window had to be taken out. But flying with a hole in the floor at 10km altitude is not very pleasant for those onboard. So, we came up with a novel design for the casing of the instrument including the polarimeter, the yaw-compensation mechanism inside an isolating dome structure. Being here and seeing that our design is all working as planned is a relief and also gives us quite a kick!”

Jens Johansen, software engineer at SRON, adds how the team improvised in testing the software despite not being able to take the Falcon off the ground. “The yaw-compensation mechanism includes software that collects flight information from the aircraft,” Jens said. “But, because the aircraft was grounded during the integration-check we put our heads together and came up with the idea to move the aircraft around in the hangar to mimic the yaw-motion in flight. This test showed us directly that the yaw-compensation software is operating correctly and that SPEX airborne is rotating in the right direction when it needs to.”

A successful week, with some definite Scooby-Doo antics in there – pushing and pulling a Falcon 20 around a hangar. Our SCRABO team is a dedicated bunch of talented engineers and they cannot wait to bring you the results of the flight campaign in May. Keep up-to-date with the latest news on our website.

Watch the team in action:

For those of you chasing the finer technical details, you may find the links below useful: